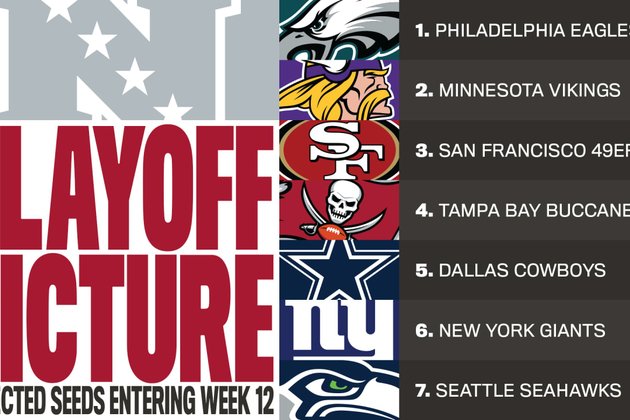 Tampa Bay BuccaneersThe results of Week 11 caused shuffling at three of final four seeds in the NFC playoff hunt, but the idle Buccaneers remained in the lead in the NFC South and thus in the fourth spot in the overall conference standingsScott Smith

After playing in the historic Week 10 game at Munich's Allianz Arena, in between about 10,000 miles of air travel each, the Tampa Bay Buccaneers and Seattle Seahawks got to enjoy a recuperative bye this past weekend. While there were definitely some noteworthy outcomes between NFC playoff contenders - most notably Dallas-Minnesota and San Francisco-Arizona - none of it changed where the Buccaneers stand in the conference playoff hunt. The Seahawks weren't as lucky.

Atlanta kept a half-game closer in the NFC South standings with a win over Chicago but the Bucs remain atop the division heading into Week 12, which means they also remain in the fourth seed at this moment. However, when the 49ers thrashed the Cardinals on Monday night and improved their record to 6-4, they also switched places with the Seahawks, taking over the NFC West lead and consigning Seattle to the Wild Card race.

Here's how the NFC playoff race stands after 11 weeks:

The Eagles had to score 14 points in the fourth quarter to slip past the Colts, 17-16, but even that underwhelming result doesn't change their current status as the team to beat in the NFC right now. They already had possession of the top seed over Minnesota due to a head-to-head victory in Week Two but are also now a game clear of the Vikings. All of that said, the Cowboys are clearly still in contention for the division title so the Eagles can't relax in the next couple weeks against the Packers and the Titans. They do have a head-to-head tiebreaker over Dallas but that could be erased when the two teams meet again in Week 16.

Week 11 probably did more damage to the confidence of Vikings fans than it did to Minnesota's playoff hopes. FiveThirtyEight.com still gives the Vikings a 97% chance to win the division and a 99% chance to make the playoffs. They have a four-game lead over Detroit with seven to go and they've already beaten each of the other teams in the NFC North. However, they actually have a -2 overall point differential after being completely throttled by the Cowboys in Minneapolis by a 40-3 score. That differential offers credence to the critics who believe the Vikings' dominance in one-score games is unsustainable.

The 49ers were the big winners of the week in the NFC. With Jimmy Garoppolo throwing four touchdown passes on Monday night they easily took care of the plummeting Cardinals, 38-10, and in the process they moved into first in the West. That division now looks like a two-team race with the Rams also fading fast and San Francisco has replaced Seattle as the hottest team in the group. The Buccaneers ended the Seahawks' four game winning streak in Germany in Week 10, and then the 49ers created a tie atop the division with their Monday night win. The 49ers and Seahawks are both now 6-4 but San Francisco won the first head-to-head battle in Week Two. The two teams meet again in Week 15. The 49ers have won three in a row, all against division foes, and now get the Saints at home in Week 12. The schedule then gets tougher for San Francisco with games against Miami, Tampa Bay, Seattle and Washington. Still, the 49ers appear to be getting on a roll at the right time, with Garoppolo making the most of a deep group of skill-position players.

The Bucs didn't move in the standings while they were idle, as noted, but the Falcons did turn up the heat a little bit in the division by narrowly getting past Chicago on Sunday. Atlanta is now just a half-game back of Tampa Bay, though the Bucs do own the head-to-head tiebreaker right now. It is possible that the Buccaneers Week 18 trip to Atlanta will be a critical game for both teams. Tampa Bay remains far more likely to get the postseason via a division crown rather than a Wild Card spot; FiveThirtyEight.com pegs the Bucs with a 77% chance to win the division and a 79% chance to make the playoffs. You do the math.

Dallas was even more impressive than the 49ers in Week 11 but the Eagles aren't giving any ground so they remain in the bunch of teams angling for one of three Wild Card spots. After routing the Vikings, the Cowboys jumped up a spot in the Wild Card pecking order, taking the first of those three spots away from the Giants, who were beaten rather handily by the Detroit Lions. Since dropping a lackluster 19-3 decision to the Buccaneers in Week One, the Cowboys have won six of eight and their only two losses have been in Philadelphia in Week Six and Green Bay two weeks ago in an overtime shootout after they blew a 14-point fourth-quarter lead. Over their last three games, the Cowboys have scored 117 points and raised their overall point differential to +84, the best in the NFC. Dallas gets the five seed over the Giants at the moment due to a head-to-head win in Week Three, but those two teams will battle it out again on Thanksgiving.

The Giants are 7-3 and remain one of the NFL's better stories in 2022, but they have lost two of their last three and now have the red-hot Washington Commanders breathing down their neck for third place in the NFC East. New York and Washington will square off twice in the next four weeks, and in fact the Giants' next four games are all against NFC East foes, so their spot in the divisional pecking order is going to be pretty clear in about a month. The Giants have signature wins over Tennessee and Baltimore this season but need to pick up some big 'Ws' on the NFC side of the ledger in the weeks to come.

Even with their loss to the Bucs in the first NFL regular season game ever played in Germany, the Seahawks have won four of their last five and five of their last seven. They also rallied in the fourth quarter of what could have become a blowout, so they should come out of their week with plenty of momentum on their side. Their next three games are against the Raiders, Rams and Panthers, all three-win teams at the moment. If they can hold serve in those matchups, they'll welcome the 49ers to Seattle in Week 15 with a chance to take the NFC West lead back.

Washington has quietly won five of their last six games, dropping only a three-point decision to Minnesota in Week Nine, and they seem to have found a spark in quarterback Taylor Heinicke. That run includes a 32-21 win over the previously undefeated Eagles two weeks ago. Now just a half game out of the last Wild Card spot, Washington draws a home game against Atlanta in Week 12 before an unusual part of the schedule that sees them play the Giants two games in a row, with a bye week in between. The Commanders 3-4 record in conference play and .397 strength of victories won't be very helpful in potential tiebreakers as they are currently constituted, but the team will have a chance to reel in the Giants on their own, at least.

Like the Buccaneers, the Falcons' best bet to make the playoffs is through a division title, as they are 1.5 games out of a Wild Card spot and the field above them is crowded with teams playing well. If the Bucs can't take down the Browns on Sunday, Atlanta could move into first place in the NFC South by a half game with a win at Washington.

The Lions have a long way to go - their playoff odds on FiveThirtyEight.com are only at 12% - but they've inserted themselves on the fringe of the NFC race with three straight wins, and in the last two weeks they've rediscovered their early-season offensive prowess, scoring 31 each against the Giants and Bears. If they can upset the Bills in Detroit on Thanksgiving, the Lions will have to be taken seriously as playoff candidates.

What Lies Ahead for Tampa Bay:

The Buccaneers come out of their bye week with another road trip on tap, albeit a much shorter one than their pre-bye journey to Munich. Tampa Bay will be seeking its first win over an AFC team this year when they had to Cleveland to play the 3-7 Browns. A win in Cleveland and a loss by Atlanta at Washington - the preferred pair of outcomes on Sunday - would give the Buccaneers some breathing room in the NFC South. However, that win won't be easy to get against a Browns team that features the NFL's fourth-ranked rushing attack and a pair of defensive stars in Myles Garrett and Denzel Ward.