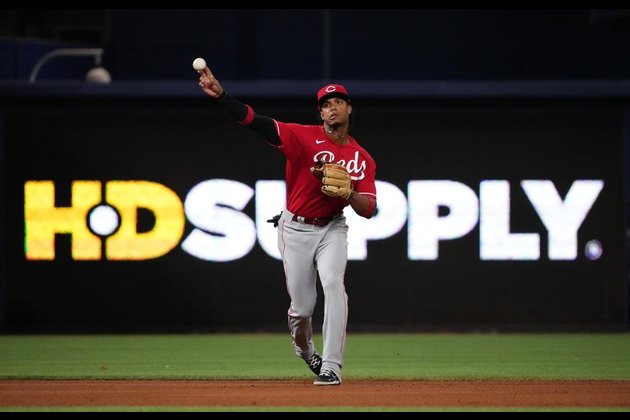 The Cincinnati Reds traded experienced players this week, adding another batch of youngsters and more discontent to a fan base that hasn't witnessed a playoff win in 10 years.

The departures opened the door for some new players to get a shot, however, and Jose Barrero is the first in line.

Barrero is expected to start at shortstop again on Friday night when the Reds open a three-game road series against the Milwaukee Brewers.

The 24-year-old Cuba native was recalled from Triple-A Louisville on Wednesday and made his major league season debut that day in a 3-0 road loss to the Miami Marlins.

Barrero, who joined the Reds' organization as an international free agent in 2017, is due to receive plenty of playing time the rest of the season.

"Every player gets to a point, every good player, where I believe there's no real development left except at the major league level," Reds manager David Bell said. "The major league level brings out the best in a lot of young players, especially the good ones."

Barrero's 2022 debut came on the same day several former Reds had noteworthy performances across the majors.

Brandon Drury, who was traded to the San Diego Padres on Tuesday, hit a grand slam in his first at-bat with his new team.

Luis Castillo, who was dealt to the Seattle Mariners on Saturday, started on Wednesday and allowed three runs in 6 2/3 innings to earn a victory against the New York Yankees.

Eugenio Suarez, Jesse Winker and Nick Castellanos, all of whom departed Cincinnati in March, also hit home runs on Wednesday.

The Brewers homered twice on Thursday, but it wasn't enough in a 5-4, 10-inning loss to the host Pittsburgh Pirates, who completed a three-game sweep. Milwaukee has dropped its past four games.

"It stinks," Brewers pitcher Brandon Woodruff said. "I don't know how we necessarily describe this week other than we haven't been playing good baseball."

Milwaukee plans to send left-hander Eric Lauer to the mound for the series opener against the Reds.

Lauer (7-3, 3.75 ERA) will look to win back-to-back starts for the first time since late May. He allowed one run and four hits in five innings during a 9-4 win over the Boston Red Sox on Saturday.

The 27-year-old is 2-4 with a 4.46 ERA in nine career appearances against the Reds, including eight starts.

His last victory before Saturday came against Cincinnati on June 17, when he allowed four runs and six hits in 6 1/3 innings during a 5-4 win. He gave up three home runs in the game, but two players who took him deep, Tommy Pham and Drury, were traded by the Reds earlier this week.

The Brewers are still trying to adjust following the trade of All-Star closer Josh Hader to the San Diego Padres on Monday.

Devin Williams, previously an All-Star setup man, gave up a walk-off solo home run to the Pirates' Bryan Reynolds on Wednesday, his first appearance since the Hader trade on Monday.

The homer ended Williams' streak of 30 appearances without allowing a run. He threw 28 2/3 shutout innings in that span.

Williams tossed a scoreless ninth inning on Thursday, but newly acquired Matt Bush gave up two runs in the 10th to take the loss.

Milwaukee catcher Omar Narvaez also suffered a quad injury on Wednesday and was placed on the 10-day injured list.

The Reds plan to start right-hander Robert Dugger (0-0, 4.50 ERA) in the series finale. Dugger has made two appearances for Cincinnati this year, both out of the bullpen.

He has faced the Brewers once in his career, as a starter on Sept. 9, 2019, when he was with the Miami Marlins. Dugger gave up two runs and four hits in three innings, taking an 8-3 loss.