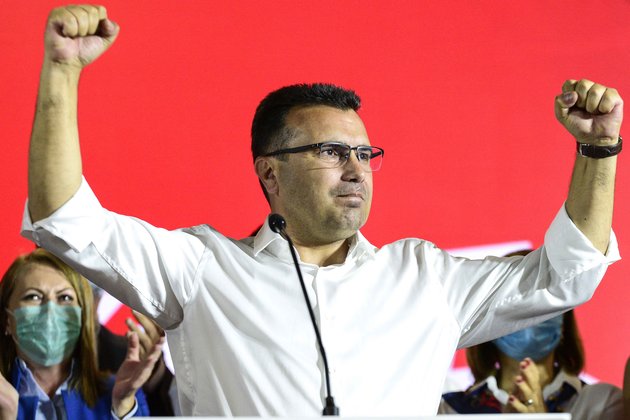 French new Prime Minister Jean Castex waves at the handover ceremony in the courtyard of the Matignon Hotel in Paris, France, on July 3, 2020. (Photo by Aurelien Morissard/Xinhua)

Japanese swimming athlete Ikee Rikako holds up a lantern containing Olympic flame during a ceremonial event to mark a year-to-go until the start of the postponed Tokyo 2020 Olympics, at the Olympic Stadium in Tokyo, Japan, July 23, 2020. (Xinhua/Du Xiaoyi) **ONLY FOR EDITORIAL PURPOSE**

The crew of the AG600, codenamed Kunlong, pose for photos after its maiden flight over sea, at Shanzihe Airport in Rizhao, east China's Shandong Province, July 26, 2020. (Xinhua/Wang Kai)

Relatives of Danny Dear Lawley, who died of COVID-19, react during his funeral in Johannesburg, South Africa, July 22, 2020. (Photo by Yeshiel/Xinhua)

Cira 02, a robot invented for the diagnosis of COVID-19 infection and post-infection medical care, conducts a test for a man in Tanta city, north Egypt, on July 17, 2020. (Xinhua/Ahmed Gomaa)

A worker directs the operation at the construction site of the Golmud-Korla Railway in northwest China's Xinjiang Uygur Autonomous Region, July 18, 2020. (Xinhua/Ding Lei)

Luo Zixin, a student of Changsha No. 1 High School, celebrates with a split leap after finishing her gaokao, or the national college entrance exam, in Changsha, central China's Hunan Province, July 8, 2020. (Photo by Gu Pengbo/Xinhua)

Residents look for their belongings from their charred homes after a fire at a slum area in Manila, the Philippines, July 17, 2020. (Xinhua/Rouelle Umali)

A girl wearing protective gear is seen at a park in Tehran, Iran, on July 19, 2020. (Photo by Ahmad Halabisaz/Xinhua)

An artist plays with a girl a grid game designed to make people respect the rules of social distancing during the COVID-19 pandemic at the Royal Gallery of Saint Hubert in Brussels, Belgium, July 15, 2020. (Xinhua/Zheng Huansong)

A coach wearing a face shield works during a swimming class at El-Ghaba Sporting Club in Cairo, Egypt, on July 18, 2020. (Xinhua/Ahmed Gomaa)

A fan is seen during the French League Cup final football match between Paris Saint-Germain and Olympique Lyonnais at the Stade de France in Saint-Denis, France, on July 31, 2020. (Photo by Jack Chan/Xinhua)