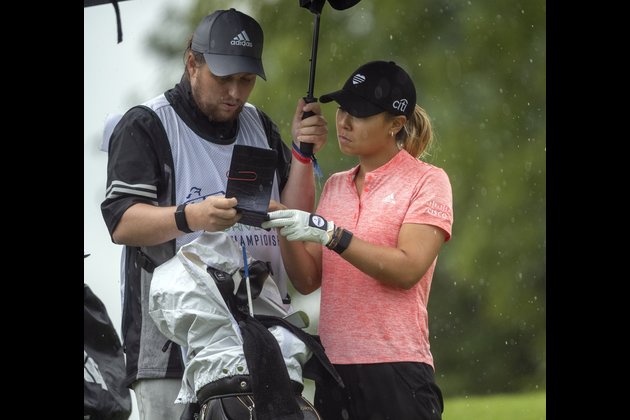 Celine Boutier, Danielle Kang and Jodi Ewart Shadoff battled through rainy conditions Saturday to share the 36-hole lead at the Drive On Championship at Toledo, Ohio.

After posting numbers in the high 60s in Friday's first round, none of the leaders broke 70 in Saturday's second round at Inverness Club.

France's Boutier shot 1-under 71, England's Shadoff posted 72 and Kang of the U.S. finished with a 1-over 73. Kang was the first-round leader after shooting 66 on Friday.

The best rounds of the day were carded by SaraH Schmelzel and Alena Sharp, who shot 3-under 69. The round vaulted the American Schmelzel into a tie for fourth at 3-under 141.

Boutier bogeyed two holes on the front nine -- including at No. 1 -- but then birdied four of her last 10 holes.

"I feel like I can handle tough weather conditions pretty well. Like in Europe it's not always great weather, and I played in Great Britain quite a bit," Boutier said after her round. "So I feel like whenever the conditions are tough I kind of actually like it, even though I don't really like enjoy it per se. It's a good challenge and I think especially on this course you have to be very, very smart."

Shadoff played an even front nine before a chaotic back nine. The Brit bogeyed No. 11, then birdied Nos. 12 and 14 before carding a double-bogey on 15. She birdied 18 to pull off the even round.

"I think it was a little bit of lapse of concentration on 15," Shadoff said. "But I just told myself, 'Just try and get a birdie coming.' Even is a pretty solid score out here today, so luckily the putt dropped on 18."

After carding a bogey-free round with six birdies on Friday, Kang ran into trouble late in her round on Saturday.

After playing the front nine at 1-over, Kang birdied Nos. 11 and 12. But she bogeyed her next three holes before salvaging a birdie at No. 17.

Joining Schmelzel in fourth is Yui Kawamoto, who shot 1-under 71.

American Amy Olson followed her first-round score of 69 with a 73 on Saturday, dropping her into a tie for sixth with three other players.