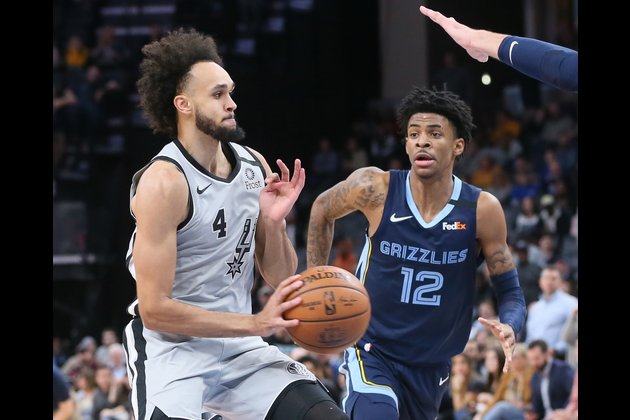 The San Antonio Spurs are taking a pragmatic approach to their games during the NBA restart, tackling things one game at a time and letting the chips fall where they may.

So far, so good for the Spurs, who won their first game back. But San Antonio could lose that momentum if it falls to the eighth-place Memphis Grizzlies (32-34) -- the team the Spurs (28-36) are ultimately trying to catch -- on Sunday afternoon at the ESPN Wide World of Sports Complex near Orlando.

With just seven games left in the seeding event, every contest carries a hefty weight. San Antonio can ill afford a misstep as it seeks out a spot in the postseason for the 23rd straight year.

San Antonio's 129-120 win over Sacramento on Friday, along with Memphis' overtime loss to Portland earlier in the day in another key Western Conference seeding game, moved the Spurs to within three games of the Grizzlies in the standings.

DeMar DeRozan scored 25 of his 27 points in the second half to pace San Antonio to a win in its first official game back in action. DeRozan hit for 17 points in the fourth quarter, including 13 in the final 5 1/2 minutes.

"I knew my rhythm would come once I got to the free throw line or got a layup or something," DeRozan told the San Antonio Express News. "I knew it was going to come, especially in the fourth quarter."

Memphis' 140-135 OT loss to the Trail Blazers on Friday came despite 33 points from Jaren Jackson Jr. and 22 points and 11 assists from rookie Ja Morant. The ragged game had 62 called fouls and five technicals, an indication of both the rust accumulated during the COVID-19 shutdown and the final stretch's intensity and importance.

"We've got to see all these games like (they are) playoff games," Jackson said after the loss to Portland. "When you're in those environments and when you're playing against good teams, we're got to be able to take on that challenge and do the little things we do well. We did that for the most part today."

Brandon Clarke added 21 points off the bench in the loss, with Jonas Valanciunas scoring 16 and Dillon Brooks pumping in 15 points for the Grizzlies. Memphis has now tied the single-season franchise record of five games with 130 or more points that was set in 2006-07.

"I thought our guys executed beautifully on the offensive end," Grizzlies coach Taylor Jenkins said. "The message (for) our guys is to keep our heads up -- we've got to learn from this and get better for the next game on Sunday. Win or lose, we've got to keep focused on the next task at hand."