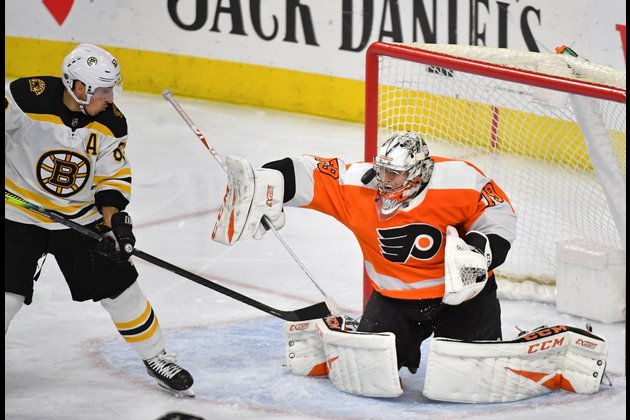 The Philadelphia Flyers will play a game for the first time in over 4 1/2 months when they face the Boston Bruins on Sunday in Toronto.

The Flyers will enter this round robin as the No. 4 seed in the Eastern Conference.

"Obviously, the higher seed we are, the better position we're going to putourselves in," captain Claude Giroux said. "But I think mostly it's finding your game, and whatever seed you're in, hopefully when the playoffs start, you have your game where you want to be as a team and also personally."

The Flyers were one of the hottest teams in the league when the shutdown began in March.

If the Flyers are going to regain their positive momentum, they'll have to adjust more than physically.

"A big, big part of this is the mental focus, the mental strength that the players bring," Flyers head coach Alain Vigneault said. "A lot of it has to do with the preparation they need to do. And the will -- the will to put yourself in the right frame of mind and play your best. Bringing your 'B' game at this time is not going to work. You have to bring your best hockey."

The Flyers, who have already won two of three matchups against the Bruins this season, will start stellar second-year goaltender Carter Hart.

Hart compiled nine wins in February and March, the most of any goaltender in the league. Yet the playoffs will present new challenges.

The top-seeded Bruins will be playing without star winger Brad Marchand, who suffered a lower-body injury in Thursday's exhibition game against the Columbus Blue Jackets. Marchand's injury doesn't seem to be a long-term issue.

Veteran goaltender Tuukka Rask struggled in the exhibition game, allowing four goals in 17 shots before being lifted. Cassidy pointed to the defensemen in front of Rask for the poor performance overall.

"They were OK. We didn't play well in front of Tuukka in the first period, obviously," Cassidy said. "We weren't on time. The Blue Jackets had more urgency. They're getting right into their elimination games, their mindset was clearly different than ours early on. I think we were, to a certain extent, trying to get back into live hockey whereas they were playing for keeps a little more : so I don't want to fault Tuukka."

Rask, who has been recovering from a broken finger, will start against the Flyers, according to the head coach.

Thursday's game was an exhibition. Starting Sunday, the games count for the Bruins.

"Pucks went through us in that first period a lot," Cassidy said. "We weren't really sharp with our sticks and our mental part of it."

David Pastrnak looked sharp in the exhibition game with a nifty goal. It had been unclear how much he would participate following an initial 14-day quarantine after his trip from the Czech Republic.

"I love the game and I'm feeling good," he said.