Where to watch, listen to Bears-Jets game 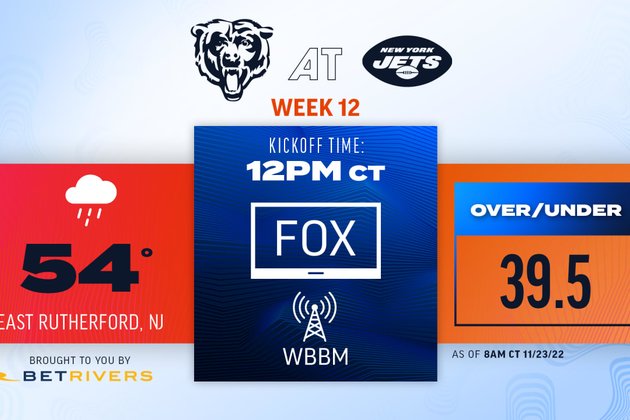 The Bears will take on the New York Jets Sunday at noon (CT). Here's how you can watch and listen to the contest.

The game will be televised regionally on Fox with Joe Davis (play-by-play) and Daryl Johnston (analyst).

According to 506sports.com, the Bears-Jets game will be broadcast in the blue parts of the map below.

The game can be heard locally on WBBM Newsradio 780 AM and 105.9 FM, with Jeff Joniak (play-by-play), former Bears guard Tom Thayer (analyst) and Mark Grote (sideline reporter) on the call.

A Spanish-language broadcast will also be available on TUDN Deportes Radio 1200 AM and Latino Mix 93.5 FM featuring the broadcast team of Omar Ramos (play-by-play) and Miguel Esparza (analyst).

• In Risk It brought to you by BetRivers, fans may wager a bank of 500 points on a series of predictions, such as 'How many Bears players will catch a pass in the game?' The fan with the highest score each week wins a customized Bears jersey plus $250 in free bets at il.BetRivers.com.

• In Chicago Bears Football Bingo brought to you by PNC, fans follow along to see game scenarios checked off of their digital bingo cards. The first 20 fans with a regular bingo will win a $20 vouchers to the online Bears Pro Shop, 10 fans with the No. 1 pattern on their card will earn a $50 voucher, and the first fan with a "C" pattern on their bingo card will receive a Bears autographed item.

Along with Risk It and Bears Bingo, fans can also take part in the traditional Dunkin' Race, which is held in the second quarter.

Be a part of the action even when the Bears are away from home. For each away game this season, a Bears Miller Lite Headquarter Bar will host a unique viewing experience with entertainment, photos ops, giveaways, food & drink specials and more. Sunday's event will take place at Reilly's Daughter (4010 W 111th St, Oak Lawn). For more information and to RSVP to the watch party, visit the Away Game Watch Parties page.

Fans in the the Chicago area can watch and listen to all Bears regular-season games live with NFL+. Sign up for a 7-day free trial.

Game Pass International (outside the U.S., Canada and China)

Watch every game live and on-demand, plus RedZone and NFL Network! Sign up here.

*Blackout restrictions apply in the United Kingdom/Ireland during the regular season.