NOTEBOOK: Jameson Williams on wearing No. 9, returning to practice 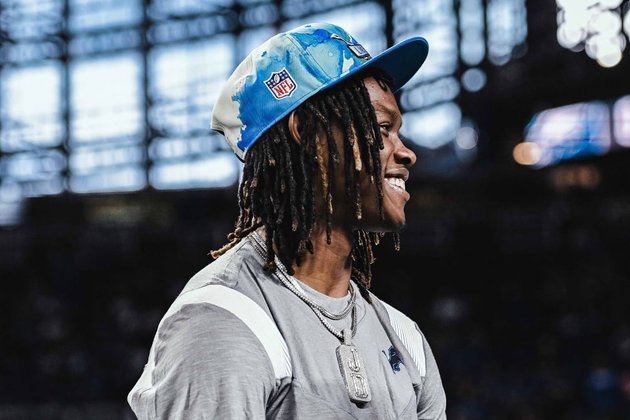 When rookie wide receiver Jameson Williams decided to change jersey numbers from No. 18 to No. 9, he texted former Lions quarterback Matthew Stafford.

"One thing he told me is the No. 9 is going to be moving a lot faster out on the field," Williams joked Tuesday when recounting his text conversation with Stafford.

Williams got to wear that No. 9 jersey on the practice field in Allen Park for the first time this week as the team started his 21-day window on Monday.

The Lions are conducting walkthrough practices on a short week, but it still means a lot to Williams to return to football activity after spending the last 11 months rehabbing a torn ACL suffered while at Alabama in the National Championship Game back in January.

"I had a lot of workouts. A lot of down days. Bad days I had to push through," Williams said at his locker after Tuesday's practice. "But I'm here now.

"I missed the game a lot. I'm real, real, real excited to put my cleats on, be able to put my jersey on and get out there with the guys. Actually be a part of the team. It's something I've missed a lot and I'm just happy to get back going."

Williams said his knee feels good and he feels like his old self again.

Williams' teammates, particularly quarterback Jared Goff, were glad to see the rookie back at practice. Goff knows better than anyone what getting Williams back in the fold could mean for this offense.

"Just having him on the field and having his ability to threaten people vertically and to turn a five-yard throw into a sixty-yard gain, that type of stuff, is dangerous."

After two straight road games outdoors in chilly temperatures, Goff and the Lions are looking forward to getting back into the warm and friendly confines of Ford Field Thursday afternoon.

Looking to make it four straight wins with Super Bowl contender Buffalo coming to town, plus the nationally televised audience taking in the contest, Goff is expecting an electric atmosphere in Detroit for Thanksgiving.

"Yeah, we were talking about it last night. Coming off a three-game win streak at home, I know what this game means to the city of Detroit," Goff said. "It's been here every year, and playing a good opponent, yeah, it'll be fun. It'll be really fun, and we look forward to seeing those (fans) out there."

Lions head coach Dan Campbell said the atmosphere at Ford Field was one of the first things he thought about on the way home from New York Sunday.

"That was one of the first things I thought of after this game on the plane ride home is like, man, this place is going to be - because it's been good," he said. "I mean, it's been electric and I can only imagine now. I already know it's going to be on fire. It's going to be great."

Lions vs. Bills practice report: Nov. 22Week 12 opponent: What the Bills are sayingO'HARA: What we learned from Week 11

Every week in the NFL poses a unique challenge to defenses. Two weeks ago in Chicago it was trying to limit dynamic Bears quarterback Justin Fields for the Lions' defense. Last week in New York it was Giants running back Saquon Barkley. This week, Detroit's defense has the unenviable task of trying to contain quarterback Josh Allen and the Bills' No. 3 ranked passing attack, which features wide receiver Stefon Diggs, who is one of only three receivers in the NFL to already have 1,000 yards receiving on the year.

"They've got receivers and it starts with Diggs," Campbell said this week. "I mean, he's versatile, he's tough, he's competitive, he's got a vast route tree. And yeah, we've got our work cut out for us."

That work is made a little harder because it's unlikely the Lions will have their top cornerback Jeff Okudah, as he's still in concussion protocol.