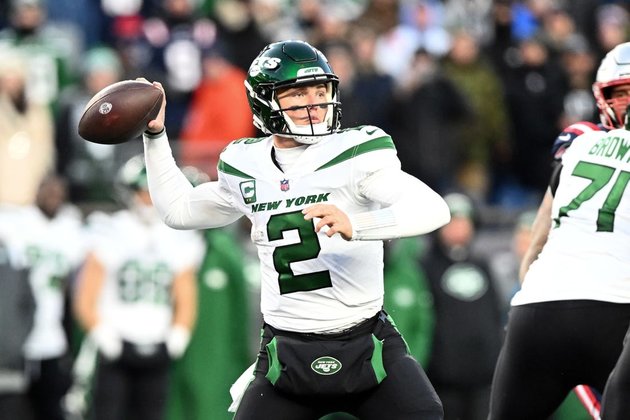 The New York Jets will not have quarterback Zach Wilson under center to start this weekend's game against the Chicago Bears, ESPN reported Wednesday.

Per the report, Jets players were informed of the decision during a team meeting Wednesday morning. The report did not divulge whether Mike White or veteran Joe Flacco would get the start for the Jets (6-4) in Sunday's home game against the Bears (3-8) in East Rutherford, N.J.

Wilson endured his worst performance of the season last Sunday in a 10-3 loss to the New England Patriots. The second-year quarterback completed 9 of 22 passes for a career-worst 77 yards and ran three times for 26 yards.

He caught heat after the game when he was asked if he thought he let the Jets' defense down. The heat came because of his one-word answer: "No."

Wilson, who was drafted second overall in 2021, missed the first three games of the season while recovering from a preseason knee injury. The Jets won the first four games he started upon his return but are 1-2 since, with both losses coming to New England.

Wilson, 23, has completed 55.6 percent of his passes this year -- matching last season's rate -- and has 1,279 passing yards with four touchdowns and five interceptions. His career touchdown-to-interception ratio through 20 career games is 13-to-16.

White, 27, has yet to throw a pass this season. He completed 66.7 percent of his attempts for 953 yards with five touchdowns and eight interceptions in four games in 2021.

Flacco, 37, completed 58.7 percent of his passes for 901 yards with five TDs and three interceptions in three games this season. He has 99 career wins.