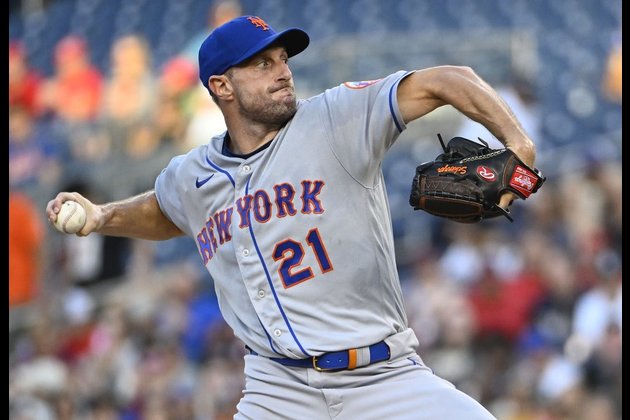 The calendar -- and hot and humid conditions in New York -- are reminders this is only the first weekend of August.

However, everything else about the series between the New York Mets and Atlanta Braves feels like October.

A five-game set already filled with playoff-like intensity is slated tocontinue Saturday, when the Mets host the Braves in a day-night doubleheader.

Left-hander David Peterson (5-2, 3.54 ERA) will be recalled from Triple-A Syracuse to start the opener for the Mets. He is due to oppose right-hander Jake Odorizzi (4-3, 3.75), who will make his first start for the Braves since being acquired from the Houston Astros on Tuesday.

The Braves evened the series at a game apiece Friday night, when they scored eight runs in the first two innings before hanging on for a 9-6 win. The victory pulled second-place Atlanta within 3 1/2 games of first-place New York in the National League East.

The Mets scored four times in the fifth inning on Friday, when manager Buck Showalter used two of his bench players -- Darin Ruf and Eduardo Escobar -- as pinch hitters in consecutive at-bats.

The right-handed-hitting Ruf, who was making his debut for the team after being acquired from the San Francisco Giants, laced a two-run double off left-hander Dylan Lee before Escobar followed with an RBI single to cut the Braves' lead to 8-5.

"They made some good moves and they've added and they've got the platoon matchups that they want," Braves manager Brian Snitker said. "Sometimes (it's like), 'You've got 40 guys active over there?' Every time you turn around -- and legit guys, too."

The Mets put two on with two outs in the sixth, which forced Snitker to use three of his best relievers -- including Raisel Iglesias, who was acquired from the Los Angeles Angels on Tuesday -- to get the final 10 outs.

Southpaw A.J. Minter retired all four batters he faced, including right-handed pinch hitter Mark Canha as the potential tying run to end the sixth inning, before Iglesias struck out two in his Braves debut in the eighth inning. Kenley Jansen gave up a solo homer to Jeff McNeil in a non-save situation in the ninth.

"Our guys kept grinding," Showalter said. "I don't think it means they used all their bullpen -- they were pretty short outings, they've got so many good weapons down there, they just kind of pass the load around. So they'll be back on their feet. They're fine (Saturday). You've got two good teams."

Peterson, who was optioned to Syracuse on July 29, last pitched for the Mets on July 27, when he came out of the bullpen to start the eighth inning but recorded just one out while giving up a game-tying, two-run homer to the New York Yankees' Gleyber Torres.

Scherzer notched a win on Monday, when he allowed three runs (two earned) over 6 2/3 innings as the Mets beat the Washington Nationals 7-3. He is 11-9 with a 3.77 ERA in 28 games (26 starts) against the Braves. Scherzer beat the Braves on July 12, when he fanned nine while allowing one run in seven innings.

Odorizzi made his final start for the Astros on Sunday, when he surrendered two hits over seven scoreless innings but didn't factor into the decision in Houston's 3-2, 10-inning win over the Seattle Mariners. He is 0-1 with a 3.18 ERA in two starts against the Mets.

Fried didn't factor into the decision Sunday after tossing seven scoreless innings of four-hit ball in the Braves' 1-0 win over the Arizona Diamondbacks. He is 5-4 with a 2.85 ERA in 18 games (13 starts) against the Mets, including a 1-1 mark with a 3.37 ERA in two starts this year.

OTTAWA, Ontario: Military trainers from Canada will head to the United Kingdom to teach Ukrainians new techniques for fighting the ...