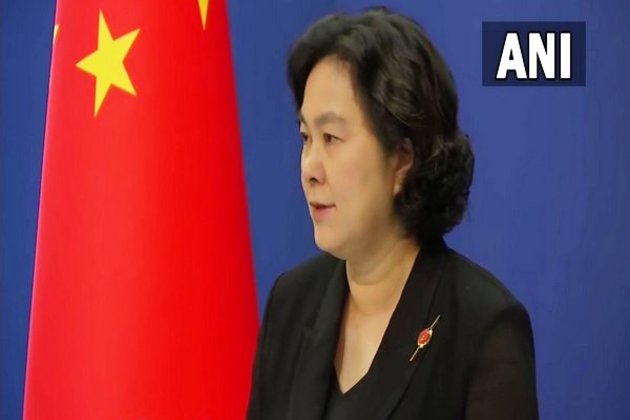 Beijing [China], August 3 (ANI): Chinese Foreign Ministry Spokesperson Hua Chunying, on Wednesday, said that the visit of US House Speaker Nancy Pelosi to Taiwan is not about democracy, but about China's sovereignty and integrity.

"The nature of her (US Speaker Nancy Pelosi) visit to the Taiwan region is not about democracy. This is an issue about China's sovereignty and territorial integrity," the Chinese Foreign Ministry spokesperson said.

This statement came in response to Pelosi's comment during a press conference that there was a struggle between democracy and autocracy in the world.

"There's a struggle between democracy and autocracy in the world. We cannot back away from that. As China uses its soft power in order to gain support, we've to talk about Taiwan in terms of its technological advancement and show people Taiwan's courage to become more democratic," Pelosi said in a response to a question about how a Taiwanese invasion can be avoided.

She said that the "demonstration of democracy offers a strong contrast to what's happening in mainland China. No more evidence is needed on what happened in Hong Kong, one country two systems didn't happen. We don't want anything to happen to Taiwan by force."During the conference, Pelosi took a dig at China's sharp reaction to her visit and said that the country didn't say anything when the men had arrived in Taiwan. A reference to the fact that in April, US senators Lindsey Graham leading a delegation of 6 US lawmakers visited Taiwan.

Earlier in the day, US reiterated Washington's support to the island country and said that the US' determination to preserve Taiwan's sovereignty was "iron-clad".

"America has made a bedrock promise to always stand with Taiwan. On this strong foundation, we've a thriving partnership grounded in self-government and self-determination focused on mutual security in the region and the world committed to economic prosperity," Pelosi said.

During her meeting with Tsai Ing-wen at the presidential office in Taipei, Pelosi termed Taiwan as a flourishing country and said that Taipei had proved the world that hope, courage and determination can build peaceful and prosperous future despite challenges that the country faced.

"Now, more than ever, America's solidarity with Taiwan is crucial, that's the message we bring in today," she added.

According to The New York Times, Pelosi is also likely to hold discussions with a number of human rights leaders on Wednesday afternoon, before she departs.

The US House Speaker had touched down in Taiwan on Tuesday night amid repeated condemnation by China, which claims self-ruled Taiwan as its territory.Shortly after Pelosi landed, 21 Chinese military aircraft flew into the southwestern part of Taiwan's air defence identification zone (ADIZ), as confirmed by Taiwan's Ministry of National Defense (MND).

Taking to Twitter, upon her arrival, Pelosi said, "Our Congressional delegation's visit to Taiwan honours America's unwavering commitment to supporting Taiwan's vibrant Democracy.""Our visit is part of our broader trip to the Indo-Pacific -- including Singapore, Malaysia, South Korea and Japan -- focused on mutual security, economic partnership and democratic governance. Our discussions with Taiwan leadership will focus on reaffirming our support for our partner and on promoting our shared interests, including advancing a free and open Indo-Pacific region," she added.

Pelosi also expressed US solidarity with 23 million people of Taiwan in the face of the increasing threat from China.

Meanwhile, China on Tuesday firmly opposed the US House Speaker's Taiwan visit terming the trip a serious violation of the one-China principle and the provisions of the joint communique signed between the two countries.

"On 2 August, in disregard of China's strong opposition and serious representations, Speaker of the U.S. House of Representatives Nancy Pelosi visited China's Taiwan region. This is a serious violation of the one-China principle and the provisions of the three China-US joint communiques," Xinhua news agency quoted the Chinese Foreign Ministry as saying. (ANI)