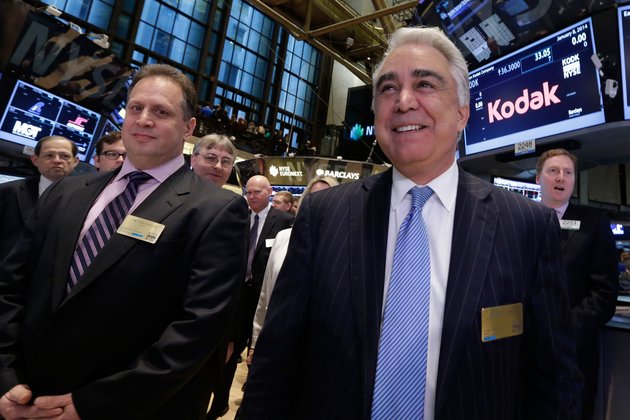 NEW YORK/LONDON - Eastman Kodak Co. on Monday granted its executive chairman options for 1.75 million shares as a result of what a person familiar with the arrangement described as an "understanding" with its board that had previously neither been listed in his employment contract nor made public.

One day later, the administration of President Donald Trump announced a $765 million financing deal with Eastman Kodak, and in the days that followed the stock soared, making those additional options now held by executive chairman Jim Continenza worth tens of millions.

The decision to grant Continenza options was never formalized or made into a binding agreement, which is why it was not disclosed previously, according to the person familiar with the arrangement. The options were granted to shield Continenza's overall stake in the company from being diluted by a $100 million convertible bond deal clinched in May 2019 to help Eastman Kodak stay afloat, according to the person's account.

While Kodak's approach is permissible, it is unusual because executives are paid to grow a company's long-term value and are not usually given extra compensation personally to cover events that may hurt share prices, several experts said.

Kodak disclosed the stock options award to Continenza in a filing to the U.S. Securities and Exchange Commission, which was previously reported. But the person familiar with the arrangement told Reuters that the transaction occurred because of the understanding with the board.

That arrangement reported by Reuters for the first time sheds new light on Eastman Kodak's handling of the unexpected windfall for its top executives.

An Eastman Kodak spokeswoman said that Continenza had no comment. The spokeswoman said the gains reflected by the rise in the share price are only on paper: Continenza, she said, "is a strong believer in the future of the company and has never sold a single share of stock."

Prior to this week's financing deal, the company warned investors it was at risk of not continuing as a going concern, but it was boosted by the agreement with the Trump administration on Tuesday to supply drug ingredients.

As a result, Continenza's gains at the end of this week amounted to about $83 million following a roughly tenfold increase in Eastman Kodak's stock, compared with the approximately $53 million in gains he would have seen were it not for the additional options, according to a Reuters analysis of company filings.

Roughly 29% of the options Continenza received on Monday vested immediately, giving him the right to cash them out as soon as possible.

While most corporate boards and their committees have wide latitude in awarding options, three corporate governance experts interviewed by Reuters said the move to mitigate the impact of dilution on Continenza's stake in the company without a prior contractual obligation was unusual.

"The compensation committee's job is not to protect the CEO from every adverse effect on the stock price," said Sanjai Bhagat, a finance professor at the University of Colorado. "It's to get the CEO to think about long-term value."

A fourth expert, Robin Ferracone, chief executive of compensation consultant Farient Advisors, said the company might have offered the prospect of additional options to executives as they worked toward the convertible bond offering - to avoid their being "disincentivized" to seal a deal that would help the firm but potentially water down their holdings.

The additional options awarded to Continenza, a former telecommunications executive, were approved by the board's compensation committee on Monday, the spokeswoman said. Shareholders had voted in May of this year to increase the shares available for executive compensation.

"The issue is the board wanted to make sure the CEO had the same economic alignment as was contemplated when he took the job," said a person close to the company.

The company's market capitalization jumped from a little over $100 million at the start of the week to almost $1 billion by Friday following the deal.

Eastman Kodak also granted options on Monday to three other executives, worth $712,000 each, according to regulatory filings. Kodak declined to comment on the reason for these awards.

The company has struggled to reinvent itself from a flagging camera company after emerging from bankruptcy in 2013. Its selection by the U.S. government for the production of key pharmaceutical ingredients surprised many industry analysts who expected such a deal to go to a major generic drugmaker.

Trump, too, hailed the development. "I want to congratulate the people in Kodak," he said at a press briefing. "They've been working very hard."