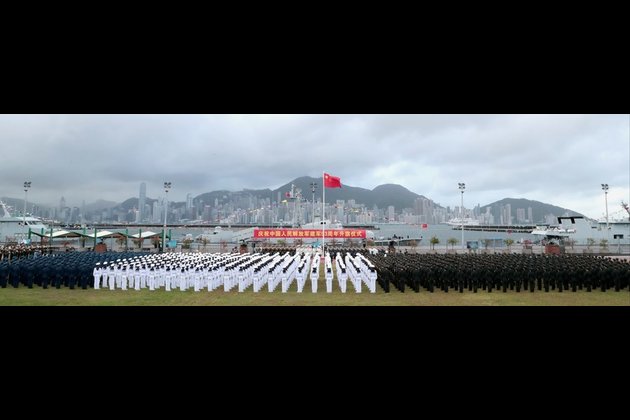 BEIJING, Aug. 2 (Xinhua) -- The world in the past 24hrs. A selection of the best daily press photos from Xinhua.

This is an image of the scene taken at the Beijing Aerospace Control Center (BACC) in Beijing, capital of China, Aug. 2, 2020.

China's Mars probe Tianwen-1 successfully carried out its first orbital correction at 7 a.m. (2300 GMT Saturday) after its 3,000N engine worked for 20 seconds, and continued to head for the Mars. (Xinhua/Cai Yang)

Photo taken on Aug. 1, 2020 shows the interior of a makeshift hospital for COVID-19 patients at the AsiaWorld-Expo, a venue near the Hong Kong International Airport, in south China's Hong Kong. (Xinhua/Wu Xiaochu)

A protestor takes part in the Emancipation Day march in Vancouver, British Columbia, Canada, Aug. 1, 2020. In conjunction with the "Black Lives Matter" protest, thousands of people took part in a march to commemorate the Emancipation Day in Canada, which is marked on Aug. 1. (Photo by Liang Sen/Xinhua)

Palestinian children enjoy themselves during the Eid al-Adha holiday, in the West Bank city of Nablus, on Aug. 1, 2020. (Photo by Ayman Nobani/Xinhua)

The dance is a Tibetan cultural heritage from the ancient Guge Kingdom that mixes speech, singing and dancing. (Xinhua/Zhan Yan)

Taking advantage of its unique culture and folk customs, the border village has turned into a tourist attraction and successfully merged agriculture with tourism by developing homestay and farm stay business. (Xinhua/Yan Linyun)

Children play with water at the Jourdan square in Brussels, Belgium, July 31, 2020. A heatwave hit Belgium on Friday. (Xinhua/Zhang Cheng)

A fan is seen during the French League Cup final football match between Paris Saint-Germain and Olympique Lyonnais at the Stade de France in Saint-Denis, France, on July 31, 2020. (Photo by Jack Chan/Xinhua)