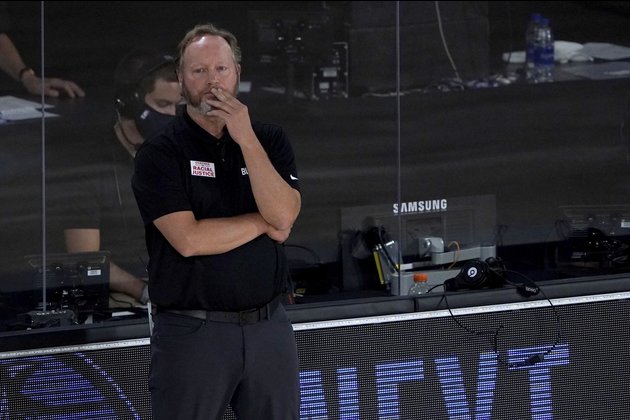 For as much as the Milwaukee Bucks' prowess is linked to the incomparable talents of MVP frontrunner Giannis Antetokounmpo, the foundation of their juggernaut status is built on depth.

The Bucks (54-12) were not at full strength in their 119-112 win over the Boston Celtics on Friday, but if theyaim to validate their standing as the title favorites, all hands will be required.

Guards Eric Bledsoe and Pat Connaughton continue to ramp up their conditioning following their late addition to the bubble near Orlando after testing positive for COVID-19.

They might not be available when the Bucks play the Houston Rockets on Sunday at the ESPN Wide World of Sports Complex, but they are making progress and their returns appear imminent.

"I think it's a little bit of conditioning, a little bit of just rhythm and everything," Bucks coach Mike Budenholzer said. "I think getting Bled and Pat a couple of five-on-five sessions at a minimum and getting some three-on-three or other situations, they just need to play. So I think that's a big hurdle."

Their status as favorites leaves the Bucks in the position of tweaking prior to the playoffs. Their level of play against Boston reflected that of a team that hasn't missed a beat, even following a protracted suspension of the season.

For Milwaukee, the seeding games feed a clear objective.

"Be the best team in the NBA," Bucks guard Wesley Matthews said. "We know that every day is going to pose a new challenge, and every team that we're going to face is going to be something that we can use to get better and ultimately, hopefully, get to our long-term goal, which is being the last team standing."

The Rockets (41-24) opened the restart with a 153-149 overtime victory against the Dallas Mavericks that featured an exceptional performance from guard James Harden (49 points, nine rebounds, eight assists) and a nightmarish defensive effort, save for the closing stretch of the fourth quarter and the extra period.

Dallas led 131-120 with just over seven minutes remaining and scored just 18 points over the final 12 minutes after posting 42- and 43-point quarters in the first half. Prior to the Mavericks' collapse, Houston resembled a team unfamiliar with the concept of defensive communication.

"We did right it, and going forward these are games that are going to be used to get all this straightened up before we get to the playoffs."

For all their offensive might, the Rockets realize that their ability to thrive is tethered to limiting defensive miscues. Fielding a small lineup presents some advantages, but it also forces the Rockets to execute with precision on defense while rebounding with a collective abandon.

For much of Friday night, Houston did neither.

"In order for us to really be the advocate for the style of play that we want to do, we have to fix the little things because one small thing could be a big problem down the road," Rockets forward Robert Covington said.