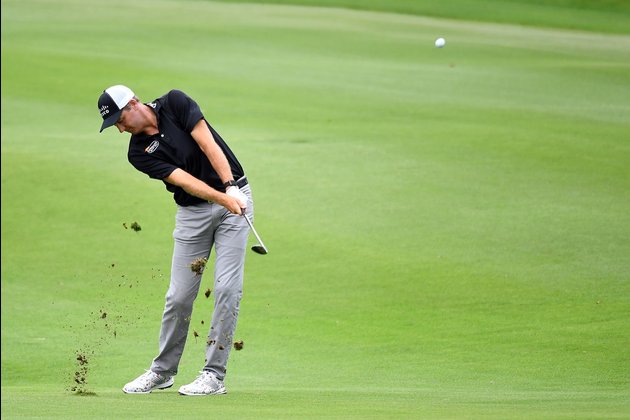 Brendon Todd survived an up-and-down round to shoot 1-under 69 on Saturday and maintain a one-shot lead through three rounds at the World Golf Championships-FedEx St. Jude Invitational in Memphis, Tenn.

Todd, who opened the day with a two-stroke lead, had five birdies and four bogeys to sit at 12-under 198 for the tournament, just ahead of South Korea's Byeong Hun An, who shot 66 with the help of four straight birdies midway through the back nine.

Several big names sit close behind on the leaderboard after a cooler, windy day at TPC Southwind. Rickie Fowler (69) is in third at 10 under, defending champion Brooks Koepka (68) is another stroke back, Justin Thomas (66) is alone in fifth at 8 under and Phil Mickelson (66) and South Africa's Louis Oosthuizen (68) are among a quartet of players at 7 under.

Todd, 35, has already won twice this season -- taking the Bermuda Championship and Mayakoba Golf Classic in back-to-back appearances in November -- and he led the Travelers Championship in June by two strokes through 54 holes before shooting a final-round 75.

"What I learned at the Travelers is just you cannot control the result, you can't control the way you're going to feel, where the ball's going to land, if putts are going to go in tomorrow," Todd told reporters after his round Saturday.

Todd was especially sharp with his putter, as he made four of his five birdies on putts of 14 feet or further.

Each of his four bogeys came after wayward tee shots, including one that found the water at the par-3 14th and a drive at the par-4 17th that faded too far and forced a layup on his approach.

"I was just fading a little bit more off the tee than I would like to," Todd said. "And I generally do fade the ball a little bit off the tee, but I missed a handful of fairways. You know, a yard right and that was just far enough from the fairway to end up with a pretty bad lie and not have a chance to get to the green."

An closed Todd's lead by rebounding from a double-bogey at the par-3 11th with four straight birdies starting at 13. He drained a 15-footer at 13, then had tap-ins from three feet or closer on the next three holes. The final birdie was nearly an eagle, as he burned the edge of the cup from 14 feet on his eagle attempt at the par-5 16th.

"Got some momentum going for tomorrow," said An, who will play with Todd and Fowler in Sunday's final grouping as he seeks his first career win.

Fowler was 3 under and bogey-free through 11 holes, but he made no further birdies and added bogeys at 12 and 17 down the stretch.

"Thought I played a lot better than what I posted," said Fowler, who missed birdie attempts from six feet at 15 and eight feet at 16. "Struggled with some reads on greens. ... They just didn't go where I thought they'd go."

Koepka led after one round, having shot 62 on Thursday, but he struggled to a 71 on Friday, then got off to a nasty start Saturday with a double-bogey at No. 2 and a bogey at No. 6. He remained 3 over through eight holes, but suddenly ripped off four birdies in a row starting at No. 9 and added two more at 14 and 16 before a bogey at the 17th.

Thomas also got himself back into contention with a late charge, stringing together three straight birdies at Nos. 15-17.

England's Tom Lewis had comfortably the best round of the day by tying the tournament record and course record, piling up 10 birdies and one bogey in a round of 61. He leapt 47 spots on the leaderboard into a tie for 10th place at 6 under.

"The greens softened up a tiny bit," Lewis said. "I holed putts at the right time, and it was great. ... I think when you shoot a score like that, everything's got to go your way."