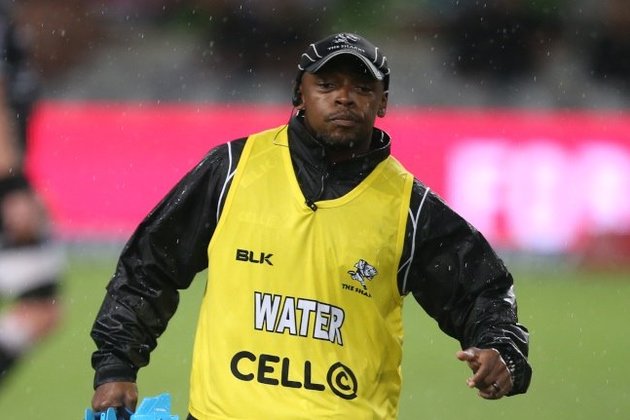 Thulani Nteta was part of the first Sharks Academy intake in the early 2000's, a class that included Clyde Rathbone, Tim Dlulane and Steven Sykes.While still a player, Nteta transitioned seamlessly from being a halfback into athletic performance coaching, where he's thrived.The curtailed 2020 Super Rugby season was evidence of how pristine fitness helped the table-topping Sharks play some of the best rugby.

One of the Sharks' best kept secrets to their successful start to this year's Super Rugby campaign was conditioning coach Thulani Nteta, an instrumental cog in their chart-topping exploits.

He was seen spotting a "salt and pepper" bearded look, eyes often peeping from beneath a Sharks cap, on the touchline of Sharks games studying the players' movements.

Before Covid-19 dealt a hammer blow to the season, the Sharks moved like Jagger, playing a sumptuous and winning rugby brand that made them the talk of the town.

Nteta was instrumental in getting the players - some of whom had returned from Japan where the Springboks held the World Cup aloft - in lean condition ahead of the new season.

If they were to entertain, hustle for 80 minutes on defence and finish with the killer instinct they did, they needed to be in preening shape. And they were.

"I was on the sideline with [Makazole] Mapimpi in the Reds game and I was very impressed with how Sikhumbuzo [Notshe], at that time in the game, was able to be aware of the situation happening in front of him and make a linebreak," says Nteta, referencing a 74th-minute midfield break by Notshe that set up Madosh Tambwe's try in round six's 33-23 win in Brisbane.

"We went and scored from it and to be able to have that agility, that awareness, and still have the speed to break through the defence and finish it all off with a good pass, that's what we strive to achieve.

"That's the Sharks way. Those double and triple efforts and getting exciting rugby going. That, for me, was a sign of a guy who put in the work in pre-season and he was seeing the benefits and rewards of that."

Nteta is a unique kind of conditioning coach; one that understands what it's like to be a Sharks player and the demands of being part of an elite management team.

The former Glenwood High School prodigy was one of the first kids brought into the Sharks Academy in the early 2000's alongside Wallaby Clyde Rathbone, Springbok Tim Dlulane and second-rower Steven Sykes.

Nteta dovetailed between scrumhalf and flyhalf and the early exposure into the burgeoning true professional side of rugby at the academy influenced him in a way beyond the playing field.

"We were the first intake of the Sharks Academy in 2002, after it ceased being the South African Institute of Rugby," he says.

"That was Tim Dlulane and Clyde Rathbone's year. I came as a short scrumhalf, who could play flyhalf from Glenwood.

"It was all about the excitement of being at the stadium and having your classes, meals and rugby sessions here in one place.

"It was very surreal in a way. The academy guys were contracted junior players, so you were going to represent the Sharks at Under-19 level and play some club rugby.

"It's so different to what the players have now but for us it was a new experience and we had never been exposed to something like that. It's what being professional was about: you got your meals from a dietitian, you got rugby and coaching classes and you learnt everything about your body.

"I was studying sports science at that time and I got to implement everything I was learning into gym sessions and on the rugby field.

"We would also get expert coaching from the elite senior coaches. It was a rich experience."

The ability to identify a post-rugby passion or career is about as difficult to a rugby player as the concept of retirement is to a heavyweight boxer.

Nteta, who poured himself into sports science while still playing, had no such issues. As a result, he was years ahead as a fitness guru by the time he called it quits on the field in 2008.

The Sharks, smartly, absorbed him into their system, where he worked for their Under-19 and Sharks XV teams before graduating to the senior team in 2014 when Jake White was their director of rugby.

"I started doing work inside the Sharks Academy as a strength and conditioning assistant in 2005 already, even though I was still playing," says Nteta.

"I would work during the day, putting in two hours or so part-time, and then go train or play. By 2008, I had fully decided that this is the path I'm gonna take.

"I looked into coaching and it wasn't for me yet and stuck to what I had experienced in those three years. That's when I made the career decision to focus on strength and conditioning and I've been with the Sharks ever since."

His time at the Sharks has been so bountiful that he is within a shout of replacing Aled Walters as Springbok head of athletic performance.

A lot of his good work at Kings Park stems from the relationship he has with Sharks head coach Sean Everitt, whom he says fosters a comfortable environment where others can speak their minds, for the good of the team.

"He was almost my coach because he tried to recruit me to go play for College Rovers in 2008, where he was coaching. I said no Sean, sorry, I'm really focusing on getting some work done.

"He caught me at a time where I'd just made my mind up that I'm gonna be a strength and conditioning coach, so I had to turn him down. He always gives me a hard time about that.

"We have a really good relationship and we come a long way. I've played against some of his Rovers teams and we get along very well.

"He's made the Sharks environment very comfortable. You feel comfortable to express yourself and to have an opinion about certain things that need to be done.

"He gives me that leeway for me to do my thing and we obviously discuss things where he sees that we could do things another way. It's all done in a good environment; it's never personal and it's always for the good of the team. That's what Sean drives."